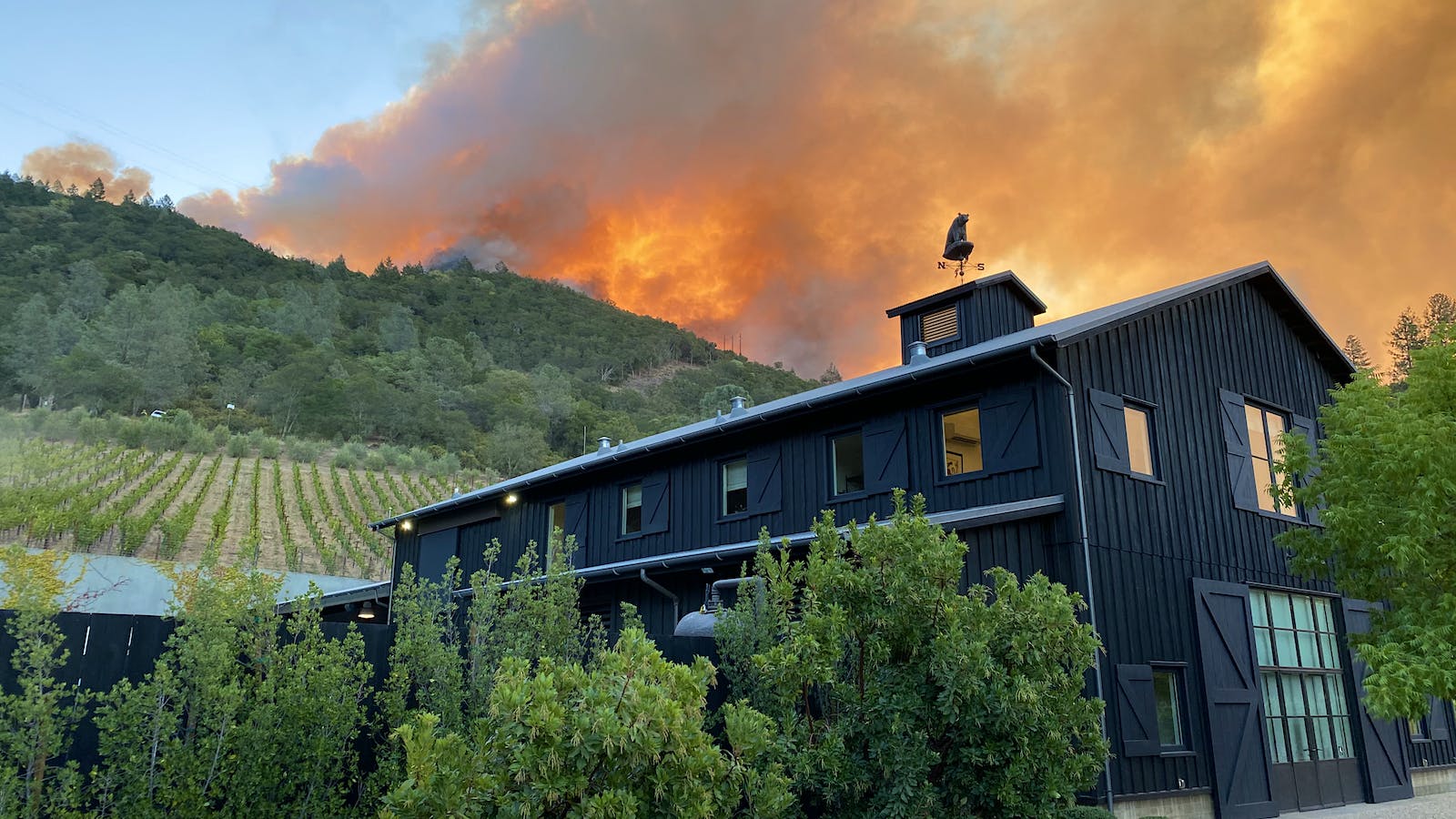 “Brutal” and “relentless” were the words one California winemaker used after receiving evacuation alerts early this morning. The Glass fire, which ignited just before 4 a.m. near the community of Deer Park, quickly spread to the eastern foothills between Calistoga and St. Helena in the heart of Napa Valley and has grown to 2,500 acres by 7 p.m. PDT, with 0 percent containment.

The fast-moving fire triggered evacuations east of the Silverado Trail, including a local hospital, Meadowood Resort and several wineries and vineyards. “It burned right up to the tasting room doors,” Mending Wall co-owner and winemaker Thomas Rivers Brown told Wine Spectator. He said that there were still 10 tons of grapes hanging on the estate’s vines in the northeast corner of the St. Helena appellation, all of which will now be lost. “We will definitely be putting it on the ground,” he lamented.

The fire has been stoked by strong, shifting winds, and gusts up to 70 mph on Mount St. Helena, and is burning a few miles from the boundary of the LNU Lightning Complex fire, which tore through parts of Napa’s rural hills near Pope and Chiles valleys in August. Fire crews attacked the Glass fire early with liberal air support from DC-10 air tankers and helicopters, hoping to gain control of the blaze. The potential for high winds remains in the forecast through Monday evening.

Farther north, the fire burned in the mountains behind Davis Estates’ 155-acre property in Calistoga that rises above the Silverado Trail. Owner Mike Davis told Wine Spectator that some of his vineyard had a close encounter earlier in the day. “Fire burned up to the edges on three mountain blocks of Cabernet Sauvignon,” Davis said, who noted that fire crews were clearing up hot spots with bulldozers and shovels. “I’m very grateful to all first responders who threw everything at it.”

It’s been a challenging month for many wine communities on the West Coast, and a reminder that California’s wildfire season still looms. Brown said he believes Mending Wall is in the clear for now, while Davis said he’s still concerned that embers might ignite spot fires, but noted that firefighters were working hard to clean up hot spots with bulldozers and shovels.

The staff at Merus winery, in St. Helena, was evacuated this morning as well. Shawn Schiffer, president of Foley Family Wines, reported that all of Merus’ staff are safe, but the property’s structures remain threatened.

Ehren Jordan of Failla in St. Helena said that when he left the winery at 11 a.m. this morning, fire personnel and dozers were cutting a line just on the north side of the crush pad, using his neighbor’s driveway as a break. “Fire was on the property, about 500 feet from the crush pad,” he said, adding, “Fingers crossed.”

—with reporting by Augustus Weed