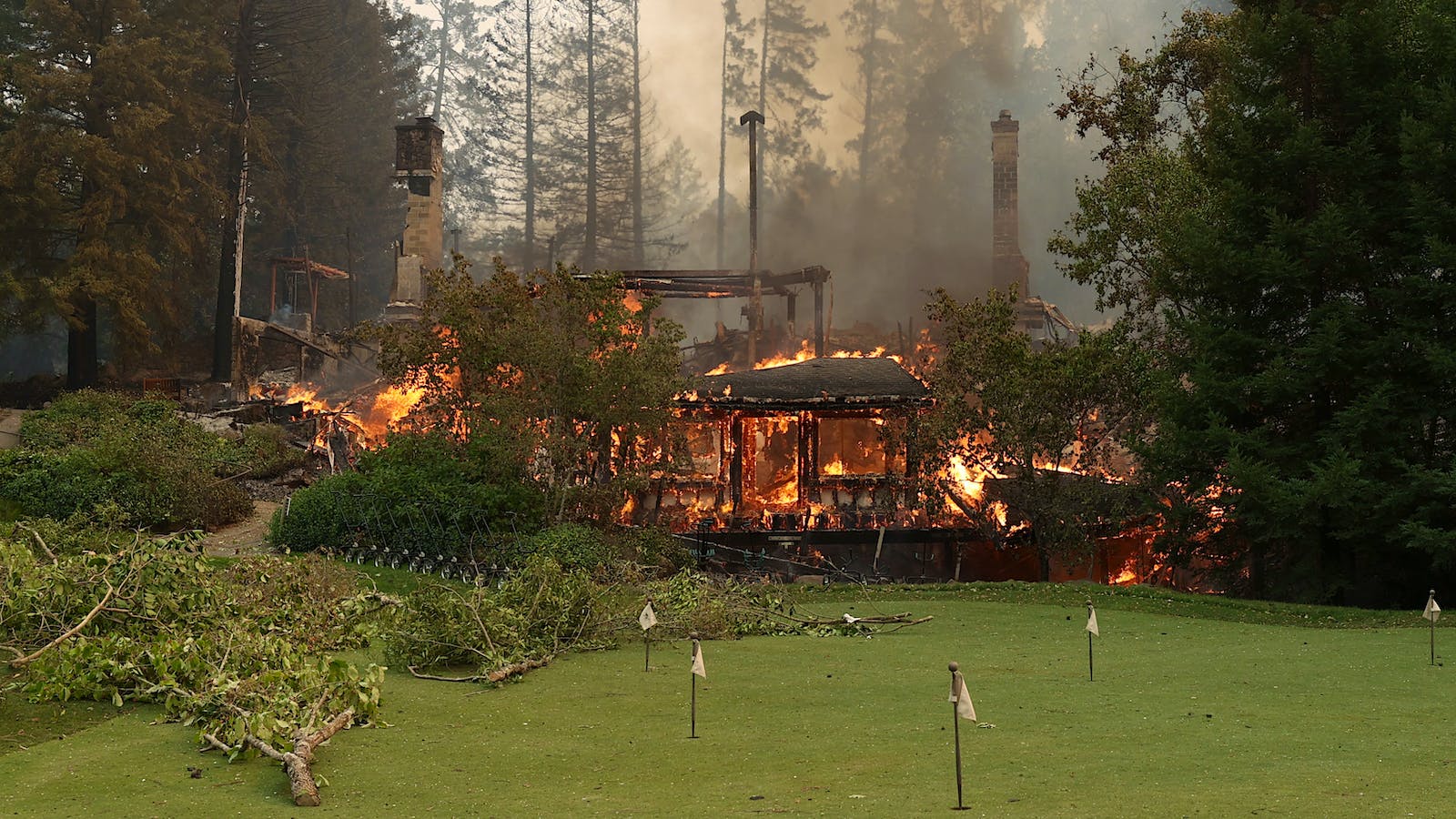 The communities of Napa and Sonoma counties have been stunned and humbled by the devastation and uncertainty brought by the wildfires that continue to rage there. The Glass Incident fires, which ignited Sept. 27, have consumed more than 36,200 acres, destroying homes, wineries and other businesses, with countless others still under threat from the fast-moving fires that remain uncontained.

Two of Napa Valley’s most prestigious luxury resorts, Meadowood and Calistoga Ranch, have suffered significant damage. Meadowood, in the forested foothills to the east of St. Helena, was evacuated Sunday afternoon and firefighters were engaged in its defense Monday morning when the fire made its approach, according to Brett Anderson, Meadowood’s director of culture and communications. “We don’t know the extent of the damage, but we have seen the photos of the fire posted by first responders on social media and are heartbroken,” he told Wine Spectator, noting that no resort personnel were on-site as of late Monday afternoon.

A representative from Calistoga Ranch could not confirm the extent of loss but confirmed that all guests, owners and employees were safely evacuated.

The ongoing fire threat has hindered many from accessing their properties to survey the scene. “We hear one thing, and then it changes. We know structures have been burned or destroyed, but just don’t know the extent,” said Meadowood’s Anderson, who also noted that the property’s owners are committed to rebuilding.

Many on the west side of Napa Valley are preparing for the worst—or have already seen it.

On Spring Mountain, Newton Vineyard reported that the winery was significantly impacted by the wildfire. “All facilities will be closed as we assess the damage, until further notice,” Jean-Baptiste Rivail, president and CEO of Newton Vineyard, told Wine Spectator, adding that the winery’s parent company, Moët Hennessy, “intends to do whatever it takes to rebuild this truly special place.” Also on the west side of the valley, photos have indicated fire damage at Castello di Amoroso, but details are not yet available.

The Lawrence Family, owners of Heitz Cellar, announced on Monday night that the recently acquired Burgess Cellars winery on Howell Mountain was destroyed in the fire. “We are incredibly grateful that our team members are unharmed,” said Heitz CEO Carlton McCoy Jr. in a statement. “We look forward to rebuilding, but right now we are focused on the safety of our employees as well as our fellow Napa wineries and the community at large during this unpredictable time.”

Sheldon Richards of Paloma, on Spring Mountain, said that he was forced off his property around 9 p.m. on Sunday night. “The road to St. Helena was closed by fires, so we eventually made it to Santa Rosa,” he said, believing that his property had been consumed by the fire. “There were a lot of fire trucks there; maybe they stayed to fight the good fight.”

On the other side of the street from Paloma, Wesley Steffens, estate director and associate winemaker at Vineyard 7 & 8, said that not long after he left the property yesterday, the fire made a run up the hill, leaving much of Spring Mountain overwhelmed by fire. “It’s hard to tell exactly where things stand, but the fire is reportedly on the next property over from Vineyard 7 & 8,” he said, adding, “I will keep my fingers crossed—and pray for calm winds—that the vineyards, if needed, become a good fire break.”

There have been innumerable close calls as well. Firefighters battled flames around Duckhorn and Rombauer, saving both. Viader Vineyards on Howell Mountain, near where the fire first erupted, welcomed firefighters onto their property, which served as a command center. “Firefighters know they have easy access to our 500,000-gallon water tank,” owner Delia Viader said, noting that all of their vineyard irrigation cement tanks are equipped with fire hydrant quick-connect valves. “There is easy access to water and good visibility, so we remain hopeful that as long as they are there, things will be protected,” she added. Her son, Alan, the family’s winemaker, has worked to maintain clear firebreaks around the property.

Ehren Jordan of Failla, who reported earlier in the day that a massive team of firefighters was stationed on his crush pad fighting the fire, was able to return to the property shortly after 1 p.m. this afternoon. “All structures are intact,” he said.

In Calistoga, Fairwinds Winery reported on their website that their property had been seriously damaged. “We hope to get creative and find ways to show you our wines in some other way on the property soon,” the winery stated.

Damage is also suspected at Sterling Vineyards in Calistoga. Owner Treasury Wine Estates issued a statement today confirming that video footage on social media appears to show Sterling Vineyards suffering fire damage, but that the property is currently evacuated and the damage has yet to be assessed.

The Glass Incident ignited on the heels of the suppression of the LNU Lightning Complex, which consumed 363,220 acres and destroyed 1,491 structures in Napa, Sonoma, Lake and Solano counties. And in a manner reminiscent of the disastrous fires of 2017, the fire charged toward the town of Santa Rosa, burning homes in the communities of Oakmont and Skyhawk. Few wineries and vineyards have been threatened thus far in Sonoma, but thousands of homes and businesses remain at risk.

Widespread evacuations have displaced thousands. And tens of thousands of those that are still in their homes are without power. As for the surrounding area, air quality has deteriorated, just as clear air had begun to return to the state. A red flag warning is in effect today due to strong and gusty offshore winds, low humidity and dry fuels, which could quickly expand the fires’ footprint. And temperatures in the mid-to-high 90s are expected throughout the week.

Vineyard 7 & 8’s Steffens said that no matter the outcome, he believes the community will come back stronger, and that they will all have many more stories to tell. “As one of my favorite mottos states, ‘fall down seven times, stand up eight.’”

—with reporting by Augustus Weed, MaryAnn Worobiec and Kim Marcus