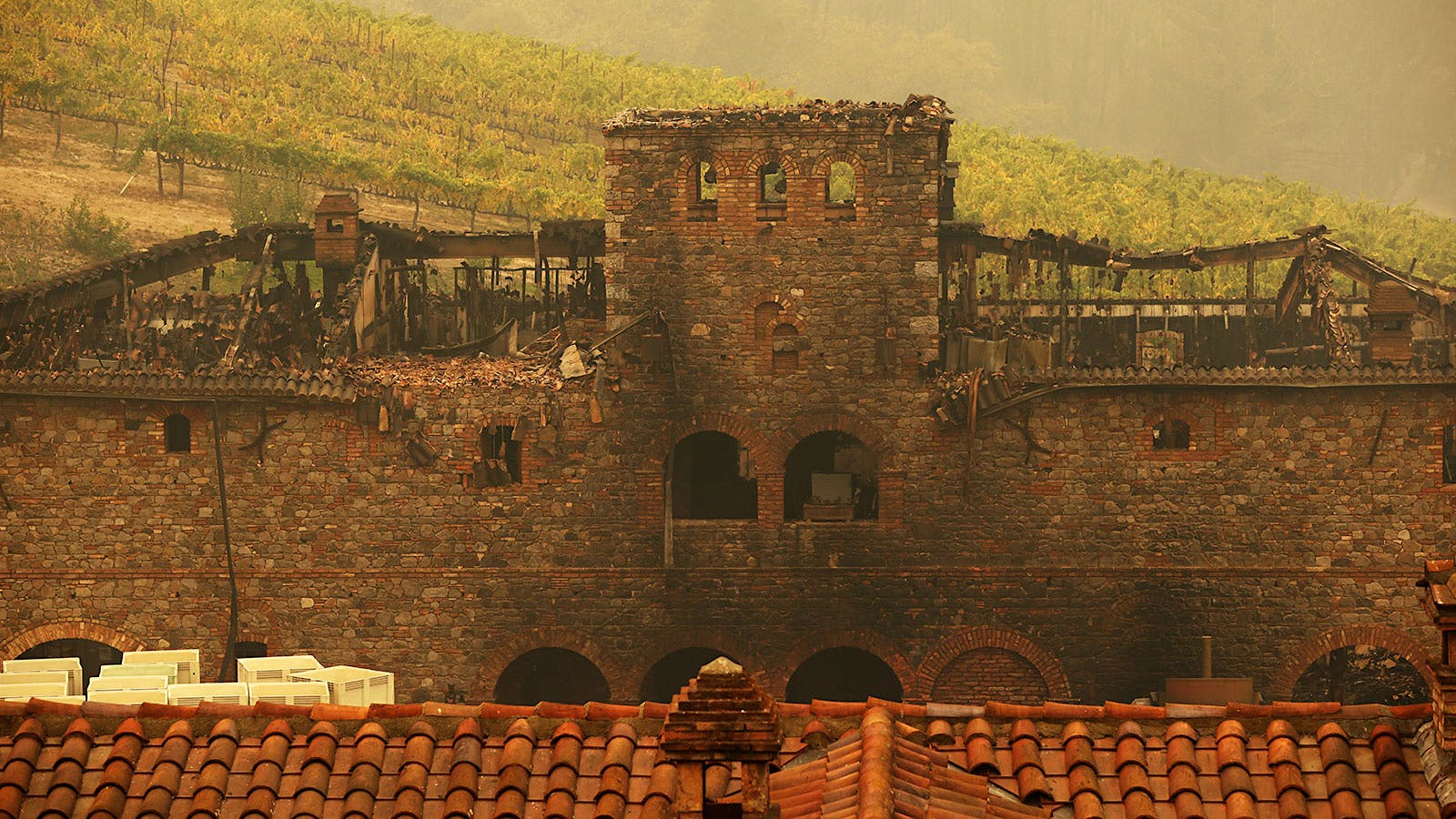 Drought, fire and smoke, earthquake and a deadly pandemic—Northern California wine country has faced a series of calamities worthy of the Old Testament in recent years. But even the Bible doesn’t warn about insurance companies.

Insurance is the latest challenge facing California vintners. After the devastating Glass and LNU Lightning Complex fires of 2020, insurance rates skyrocketed and many wineries are struggling to find coverage they can afford. Some can’t secure fire insurance at all.

For the insurance industry, wine country is just too risky. Insurers absorbed huge losses following the catastrophic 2017 Sonoma Complex fire, which was followed by major fires in 2018 and 2019. Some insurers have now dropped out of California to cut losses.

Andy Peay of Peay Vineyard is among many winegrowers facing this new challenge. Located on the rugged Northern Sonoma Coast, Peay’s ranch lost its fire insurance this year, following five consecutive years of 30 percent rate increases. As he scrambled to find coverage, he was turned down by nearly 30 companies. He eventually secured coverage for his buildings, but not his vineyard. “The downside is we’re surrounded by trees,” Peay said, “and there is a lot of fuel in those forests.”

Schramsberg in northern Napa Valley fared better. The historic estate is secluded in a forest, and lost many trees in the Glass fire, but the estate survived. Schramsberg president Hugh Davies says he was able to maintain coverage. “But we’re paying four times what we used to pay,” he said. “While the premiums go up, the deductibles also go up, while overall coverage goes down.”

Large companies with multiple wineries face similar challenges but have deeper resources. Vintage Wine Estate, which owns Cameron Hughes, Clos Pegase, Layer Cake and Qupé, among others, has seen rates increase 500 percent since the 2017 fires, according to CEO Pat Roney. At Jackson Family Wines, which includes Kendall-Jackson, La Crema, Brewer-Clifton and more, it’s a similar story. “It’s been increasingly challenging to obtain coverage each year. Not only has it been more expensive, but we’ve seen a reduction in coverage positions,” said CFO Tyler Comstock.

For insurers, the reluctance to offer policies is all about the bottom line. ”Risk Management Solutions estimates that the insurance industry will pay out upwards of $13 billion in losses from western U.S. wildfire events in 2020, further contributing to an unavoidable tightening of the market and reaffirming the growing catastrophic nature of wildfire risk,” said Matt Campbell, vice president of commercial lines at the trade group American Property Casualty Insurance Association.

“Capacity is shrinking and costs are rising under the pressure of rapidly increasing losses and cost increases in the reinsurance market for wildfire coverage,” he continued. “This leaves policyholders looking for coverage in an insurance market with higher premiums, increased deductibles, or lower overall limits of insurance. At the same time, intensifying drought conditions are making forests and brush more flammable, creating more intense and damaging fires.  Wineries are particularly vulnerable to wildfires because of the nature of their operations and where they are typically located.”

The Napa Valley Vintners and Sonoma County Vintners associations have been thrust into leadership positions as frustrations among their members have intensified. “Wineries used to have four or five insurance [firms] bidding for coverage, now they’re lucky to get one,” said Mike Haney, executive director of Sonoma County Vintners. “We have some wineries operating today without any insurance.”

The insurance landscape for vintners has changed dramatically in the past two or three years, and some wineries are “operating without a net,” as Michelle Novi, industry relations and regulatory affairs director at Napa Valley Vintners, put it. “We’re in the trenches. This is a slog and there’s no silver bullet here.”

Associations are helping members navigate the complicated world of insurance, assisting with coverage and claims concerns, as well as suggesting ways to better protect their properties from fire. Phrases like “risk mitigation” and “fuel management” have entered their vernacular. At Schramsberg, for example, Davies installed exterior sprinkler systems on all the buildings, and has a full-time team cleaning brush and trees around the estate.

Campbell insists insurers are also addressing these issues, even if it feels like added burden and cost to wineries. “Insurers are working with their customers, government officials and others to find solutions to the factors contributing to increasing wildfire risk, including changing climate conditions, forestry management strategies, zoning, fire prevention, firefighting practices and property loss mitigation.”

Cade Winery was in the path of the Glass fire in 2020, but the estate on Howell Mountain above Napa was just scorched around the edges. Managing partner John Conover hustled to get coverage for the winery this year. He even spent $100,000 on fire-resistant landscaping and other upgrades, hoping to appease insurers. It didn’t get him a lower rate. “We’re paying three times what we were paying,” says Conover, who’s also a partner in PlumpJack and Odette wineries. “I’m just happy to have insurance.” Conover and Davies also spread their risk other ways, by storing wine inventory in multiple, low-risk areas.

Complicating the issue, most lenders require vintners to maintain fire insurance. If there’s no insurance, the loan is in jeopardy. “You get squeezed between these two issues,” said Roney.

With so many wineries absorbing these extra costs, what does that mean for consumers? Will wine prices soar like insurance rates? Most vintners and industry observers say no. Consumers aren’t ready for price hikes. “Vintners have eaten a lot of these expenses and they’re holding the line on pricing,” said Haney.

Despite these challenges, vintners aren’t pessimistic about the future. “Farmers are optimistic. You have to be,” said Peay. “I’m not getting out of the grapegrowing or winemaking business.”